Open from 9:30am daily excluding Christmas and ANZAC Day. 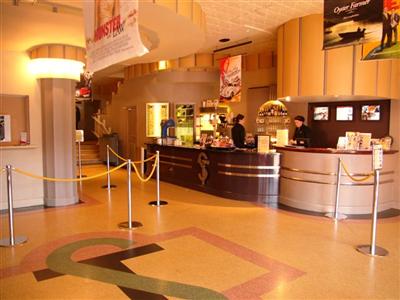 The entrance foyer The Sun originally opened in 1938 and was a single screen 1050 seat cinema – the most luxurious in the area. Today it has 8 boutique cinemas, ranging in size from 200 seats down to 23 couches and varitions in between! The Sun neon sign, Yarraville’s own icon! 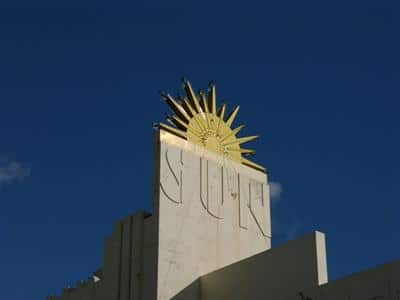 What makes a great cinema?

“S S S S”: Rock Kirby, the visionary founder of Village, had a saying that there were three ingredients that made a great cinema – SSS – Seating, Screens and Sound – we have made these three of prime importance, but added one more – Style, so with a mix of new and old we believe we have created Melbourne’s best cinema outing. Art Deco Style: Along with the original auditorium, we have an additional seven new cinemas. But don’t let that word “new” mislead you, they are within and next to the original cinema. At 1050 seats, it was a huge space, and all of the original Art Deco architecture has been maintained and enhanced within the new auditoriums. What we have created is unique in Melbourne, an 8 screen boutique cinema, where all of the screens have the original style of architecture. 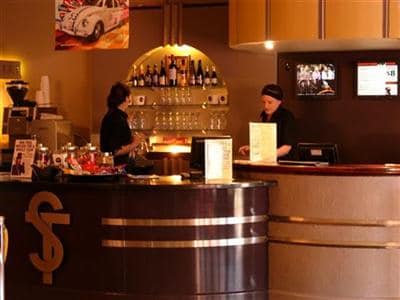 Seating and leg room: One of the most popular features of the current cinema was the original club style seating – we have scoured the country side to find more of these seats. They were fully refurbished when reopening with Suede upholstery. We are now in the process after 12 years of having reponded to refurbish the seats again – a reworking of the design has us reupholsetring in leather, with more padding and all new seat bases – much more comfortable, sumptuous, fabulous… All seats will continue to share a small table and the leg room is still the best in town. Screens and Sound: The shape and layout of the cinemas has been worked around screen size and proportion, to maximize picture size between the ratios without making it so large as to be un-watchable. The sound will utilize digital decoding, with the Grand and Barkly cinema having the latest 3 way sound system from Krix. Upon reopening pictures came from the 1950’s generation – four of the cinemas were fitted with German Bauer B-14’s We’ll resort to a cliché – “They don’t build ‘em like they used to,” and certainly, these projectors are without equal, from an era when engineering came before outsourcing, cost cutting, unionised work forces, enterprise bargain agreements, flexi-time, credit cards, tertiary fees, fringe benefits tax and frivolous law suits. The Barkly and the Davis retain these film projectors today, but in 2009 the Sun Theatre was the first cinema in Australia to convert to digital, aiding operation complexities of showing as many films as possible greatly, while improving picture quality and longevity of presentation. 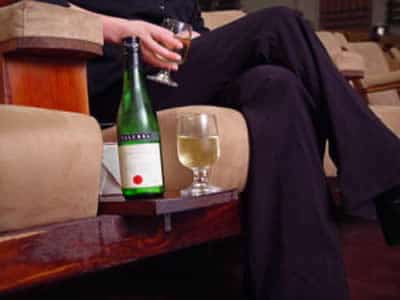 Multiplexes number their cinemas, we name them. The local cinemas that are remembered with affection by the locals return in name at least to the Sun.

The last of the local cinemas to close, was run by Yarraville’s very own Yoda – Brian Davis, who before that was a projectionist at the Sun, as he is again today! Our largest cinema, utilizing the original stalls and proscenium area of the Sun, it is the image in my mind that for the last few years has inspired the path forward. The Wurlitzer organ is from the original Grand and has been kindly donated by Brian Davis. Another feature is a large screen and outstanding 4k Digital projection. 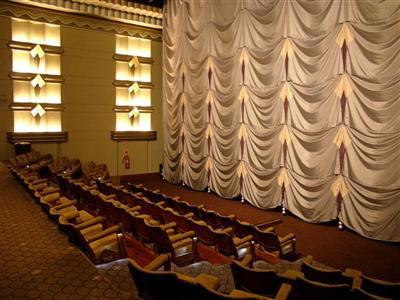 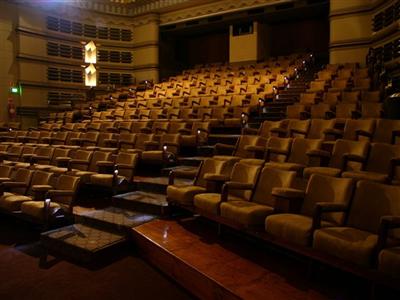 The Grand truly lives up to it’s name with art deco elegance.

The once fabulous Footscray cinema, is the new name for the current cinema, based in the dress circle of the original Sun. Fully refurbished with our new seats, tables for your drinks and more spacious aisles for comfort. 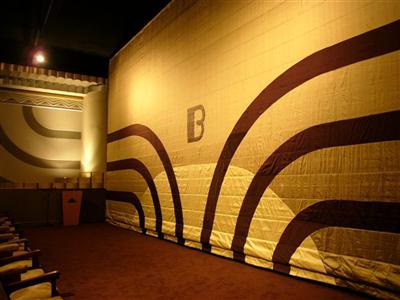 The long closed Hoyts cinema in Footscray is the inspiration for the new 83 seat cinema, featuring parts of the original plaster where possible, and new sections created from a mould created off an original section made by Pictons and Hopkin of Fitzroy. We think the result is very exciting, the main curtain is unique with an opening mechanism that we have made just for this room. 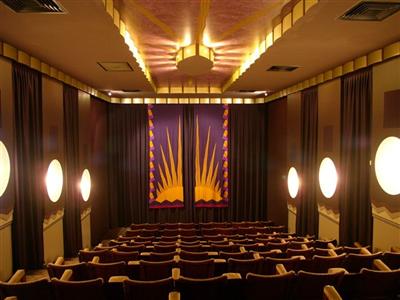 The Trocadero is intimate and stylish.

The second cinema in good ole 3013 in Stephen Street, that after closing has been Swanston’s Engineering and a sweat shop, is now our local vet and a bunch of ultra groovy warehouse apartments, is the namesake for the new lounge cinema. Originally planned to be our private screening room. We have instead put in 43 luscious leather lounge chairs in couch and single combinations….with coffee tables of course, and despite the extra comfort and leg room, the same price as the other cinemas. Call it First Class, Le Premiere, Gold, Platinum, whatever… it’s comfortable, inviting, fun. 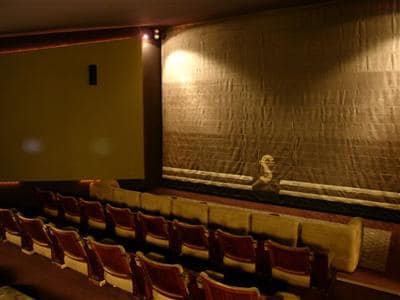 Named after the cinemas principal benefactor who was a projectionist at the SUN in the 50’s and for some time owned and operated the GRAND cinema in Footscray. All of our Bauer B-14’s, the Wurlitzer organ, the telegrams and many more precious items of memorabilia have been donated by Brian and we dedicate this 100 seat cinema to his generosity. An art deco rose motif is included in the detailing of the illuminated side wall panels, the stunning lead light oval shade in the centre, the appliqued curtains and the foyer lighting. We know you will love this cinema with great sight lines, huge leg room and big sound. 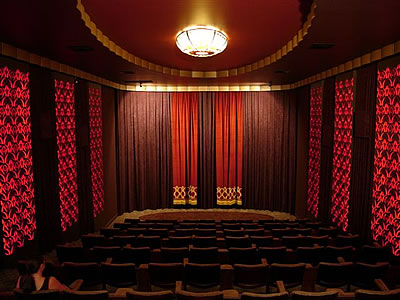 Named after the Barkly Street Italian cinema where Gina Lollabrigida and La Dolce Vite were on screen regulars. Luxurious comfort is the feature of this auditorium. Fifty-two very comfortable leather couches and singles are generously spaced for your viewing pleasure. A local artist, Esther Ruiz has created 2 triptych’s, Red Girl and Fur Girl which create an atmosphere of sophistication capped on with a hand painted gold curtain. I love watching films in this cinema and many of our regulars now ask “What’s showing in La Scala today?” 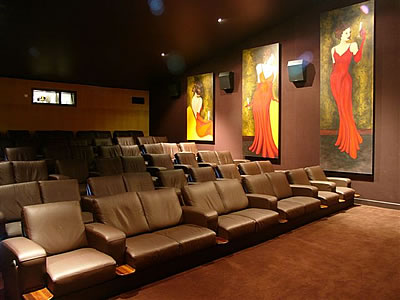 Named after the cinema ön the other side of the tracks.” Originally built as a local hall in the late 1800’s, it was turned into a cinema and later a dancing studio by Pat for decades. Now turned into anapartment complex, the stylish facade has been restored and faces the Sun from across the railway station. So, we got a bit carried away with this cinema. Built above the side of the building, half way through construction, when we realised the room was taller than it was wide – we stood back and thought – this is high enough to have a balcony – yeah, wow, what fun, let’s build a balcony… A spiral stair and some seriously fancy detailing and a few more months later – voila, a truly boutique cinema featuring our leather lounge seats.

Named in honour of Roc Kirby’s first cinema, the Roxy Maidstone. Tis a wee cinema, with 23 lounge seats, but it is darned cute…. Very intricate detailing and a wall to screen make it a great place to enjoy a film. Also ideal for those smaller groups wanting a private cinema for a screening.